In honor of the final weeks of summer, here’s a piece by a good friend and fellow teacher-writer, Jen Haberling.  Enjoy! ~ 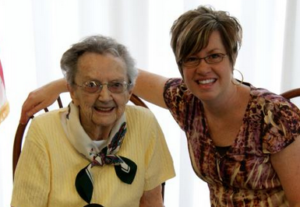 I didn’t know then how wise this woman was.  I didn’t realize how much her influence would permeate my own mothering.  Her sass is infamous.  Her one-liners, legendary.  And her red bikini, well, that’s another story altogether.  Margaret Ann McPhillamy Schaeffer, the youngest of13 Irish children, runs through my veins.  Her grit, her work-your-hands-to-the-bone mentality, her youthful attitude, her charisma and confidence, her competitive nature.  And sometimes even her flair for the dramatic.  I am proud to call her my grandmother.

Sharing shopping and lunch with Grandma was a tradition that my mom instituted while my sister and I were young, filling my elementary-librarian mom’s two personal days. The three of us would drive from Kalamazoo, after conspiratorily calling in “sick” to school, to meet in Grand Rapids for shopping, mostly at the ever-elegant Rogers Department Store, then head to Arnie’s for lunch, then more shopping at Woodland. I looked forward to the tradition every year, as I knew it would pad my middle school closet with Izod and Calvin Klein and ESPRIT.  That tradition had waned into my college years, though, as Mom’s cancer enveloped and finally defeated her frail body.

Grandma rarely called me, especially in my early married days, but I always looked forward to seeing her and sharing some time catching up.   It had been at least 15 years since Grandma and I had spent the day shopping and lunching.  On this day, however, it didn’t seem to be a leisurely shopping excursion she was after.  “Jen,” she said as I picked up the phone.  “Pick me up.  I have something I need to get at the store.”  The urgency in her voice led me to believe she needed a prescription refilled, or was out of milk– or maybe even out of beer.  She had lost her ability to drive in her early 90s, so I knew this must be an excursion that required a ride.

When I arrived, she met me at the top of her steps, the front door latching behind her.  She had one foot in my car before I could even greet her.  “Let’s go,” she commanded.  “I need to show those ladies at the Y a thing or two.”  I had no idea what Grandma was up to, but this didn’tseem to be about prescriptions or milk or beer.  Whatever she was up to, her competitive nature was clearly in control.  She clutched her handbag and directed me to 28th Street with curt and pointed turns, no time for chit chat.

We pulled into Rogers, walked through the haze of old-lady perfume that hung in the entrance, and headed straight to the juniors section.  This was not where I expected to go with Grandma. “Where are the swimsuits?”  Grandma asked.  I knew Grandma had a funky style all her own, but juniors-sized bathing suits?  The look on the clerk’s face following Grandma’s inquiry confirmed that I was not crazy– though Grandma might have been.  The clerk tried to steer Grandma to the older-woman section, but she would have none of it.  As she surveyed the racks lined up like summer-time soldiers before her, she demanded, “No– I don’t think you understand.  I want a red bikini.  Not an old, skirted grandma suit.  I want a spicy hot, resort-style, red bikini.  I have to show those ladies at the Y that I still have it.”

As she plucked three or four hangers from the rack, she invited me into the dressing room to help her select just the right style.  These were no modest tankinis.  They revealed more about my grandmother than I had ever seen.  As she adjusted her voluptuous bosom into the cups two handfuls at a time, she added a running commentary warning about the dangers of thinking oneself old, mingled with the wisdom of staying in shape.  “It’s all in your outlook, Jen,”  she reminded.  “You are only as old as you think you are.”   This was one of Grandma’s many mantras.  She kept pace with women a third her age, swimming daily and walking everywhere.  Her vanity revealed itself in her Este Lauder skin care regimen and embarrassment when anyone saw her hair prior to a proper combing.

I will never forget the look on that clerk’s face as she up-downed my 93-year-old grandma at the register, handing over the Baywatch-style, ruby-colored scraps of fabric.  I was clearly more self-conscious about this purchase than my grandma.  The clerk’s confused grimace haunted me all the way home, until I had time to call my sister and relay the unbelievable story, celebrating this vivacious woman who was the matriarch of our family, who I would later come to admire instead of question.

The notorious red bikini.  Like Grandma,it’s a story that will live on in the collective McPhillamy history.  It makes appearances at nearly every funeral or cousin gathering.  I’m sure she did show those ladies at the Y a thing or two– probably more than they wanted to see.  And she certainly showed me how to live well, to embrace myself, to walk confidently and to wear the red bikini with flair.