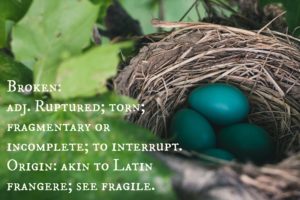 It was just a few minutes after I had shooed the boys outside when I found them – all three – peering down into a trash can that had been dragged into the garage. The teamwork and silence were a clue that this scene needed further investigating.

At the bottom of the bin I saw a small robin, struggling for breath. The details were fuzzy, but involved a Nerf gun, the bird (which I gathered from later confessions may have been injured or slow) and its transport to our garage.

For an instant, I wondered if this was just a “boys will be boys” moment, but as I looked into the faces of my little guys and down at that little creature, I found my eyes glassy and my voice shaking. Their original faces of bewilderment turned toward panic, and my oldest began to cry, promising “I didn’t mean to”and “I didn’t know.” My middle, whose emotions mainly display as anger, turned bitter, his voice short, and voluntarily lifted the bird and carried him back outside to the green grass. The bird still made no attempt to fly.

For the next several minutes, we had a few more tears, a little more anger, and too much lecturing from me. By filling the silence with noise, I justified moving on quickly from anything too messy. By telling my kids how they should feel, I rescued them from what they already felt. By naming the situation before they could process it, I found a way to assure them – and myself – everything was okay, when maybe it wasn’t.

Leaving the bird be – with hopes would miraculously wake from its daze and fly away – we all piled in the car to run off to whatever thing we had planned next. Driving out of the neighborhood, with a bit of fresh air coming through the windows, I finally remembered to quiet down, perhaps long enough to allow room for some empathy, some room to just be broken.

It’s a tricky path to navigate.  Protecting my kids’ innocence, while still wanting their hearts to be tender enough to ache.  Remembering my job is not to squeeze them into a mold.  Restraining from fixing my third grader’s spelling errors so he can write his own drafts before Mom gets out her red revision pen.

In a broken world – with war and unrest and children sitting alone at elementary school lunch tables – I desperately want my boys to be safe, happy, and loved, but I also want to allow them to feel discomfort; to not be so protected, numb or self-absorbed that they don’t recognize the pain of people around them.

It’s moments when we stare down at a dying bird or overhear a news report on school shootings that our little ones need a chance to ask a few questions. And while I’m not advocating trading in PBS morning cartoons for CNN, it does seem like kids deserve adults willing to wrestle with them through the hard stuff. Though I want to protect my sons from pain and harm, I also want them to see that the world is bigger than their neighborhood and that there are tragedies bigger than running out of Frosted Flakes in the morning.
On returning  home, my oldest son went back outside to check on the bird.  I wobbled between trepidation and pride as I watched through the window as he stooped to pick up that little creature, walk it slowly to the trash, and then make his way back into our door.