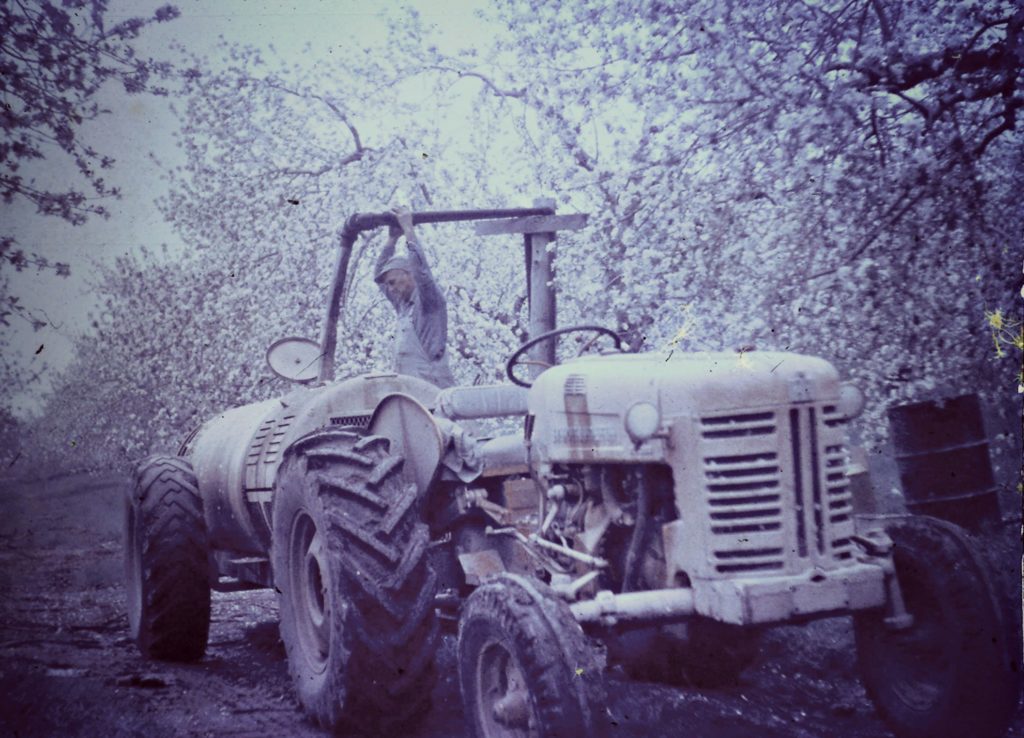 Upon the death of our trees,
I learn the Hebrew word for orchard is paradise

I’ve grown up watching my father eat apples
straight off the trees.
His mouth wide,
he’d take one giant bite,
tearing the skin,
exposing the belly,
carving out one side of the round, crimson masterpiece

with the sharp of his teeth.

Then, baring the pearl white
of its insides,
and without noticing his own arm,
he’d toss the fruit
a few rows behind him, an offering
of half-eaten McIntosh,

We could afford this.

They were ours.
We could take only one bite and
throw it down, throw it back.
We had no reason to finish every bite,
to eat all the way to the core, to the seeds.
~ 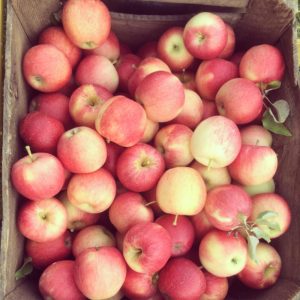 I wrote this poem in 2001, before kids, before meeting my husband, before college graduation. It was about that time that I started writing about my family’s apples, our trees. My grandpa was an apple farmer, and when the orchard he managed closed up, when the equipment was auctioned off piece by piece, when the fall came and no one was out picking, I became keenly aware of how much of me and my family was wrapped up in that land, of how those rolling acres were the setting for so much of our story.

Now, several years later, my mom and dad have planted apple trees on nearly every available inch of their land. And so, when I get to witness my boys playing on the farm, picking apples, or riding the tractor with Papa, I well up with gratitude. And I remember the words I wrote late at night in that college dorm room nearly two decades ago:

The miraculous can be so close to mundane that we often miss it.

I’ve grown up watching my dad grab a fresh apple off a tree, take one giant bite, and then throw it back into the tall grass surrounding another row of Spies, Ida Reds, Galas.  It seems he would do this without even noticing the apple, or maybe with the deliberate arms of a man who knew he could take only one bite, a kind of taste testing of a masterpiece.

I’ve started to take pictures of them now, of the trees, of the apples, of the baskets we carry them in.  I’m terrified of losing them. My kids may not grow up with the indulgence of taking just one bite, then throwing the apple back, knowing there are millions more hanging on the trees.  They may not get the chance to go for rides in the back of the pickup truck on Sundays, with their Grandpa driving, aunts and uncles and mothers and fathers sitting on the back of the cab, ducking under low-hanging branches, getting off while Grandpa tries to drive the raggedy truck up the hills.  They may not be hushed to spot a couple of deer nibbling off branches, to be quiet so that everyone can get a glance at the timid creatures before the white tails run, bouncing farther into the trees. They may not know this. They may not live this. 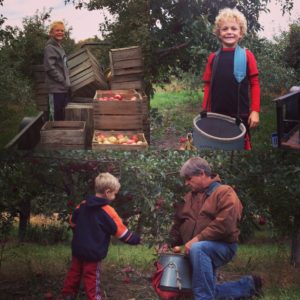 But my kids are living this, I’m still living this, and this time – miraculous or mundane – I’m not missing it.  Each fall, I’m extraordinarily grateful not just for the sweet taste of apples, but for the memories my kids are planting – for the the dirt under their fingernails, the holes in their jeans, and the sticky chins I’m washing. 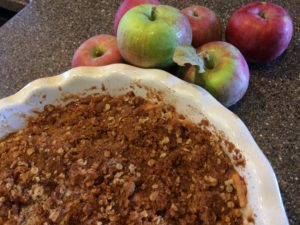 Apple Crisp is my go-to fall dish. It’s much faster and easier than pie, and the smell that fills the house is almost as good as the taste. My recipe is a combination of my Grandma Lamers and Betty Crocker — Grandma skips the oatmeal; Betty uses less butter.  Serve with a dollop of whipped cream or a scoop of vanilla ice cream.

Heat oven to 350 degrees. Grease sides and bottom of a pie pan or 8×8 square pan.  Peel, slice, and scatter apples in the pan. Eat a few as you work. You’ll have to cut up a couple extra because your kids will walk by and steal a few, too. It’s okay — they’re good for them.

Mix remaining dry ingredients, adding butter last and cutting it into the dry mixture. Sprinkle the mixture liberally over the top of the apples.

Bake about 40 minutes, or until the top is golden brown. Serve warm. It reheats just fine.

← That first hill Out of tune →